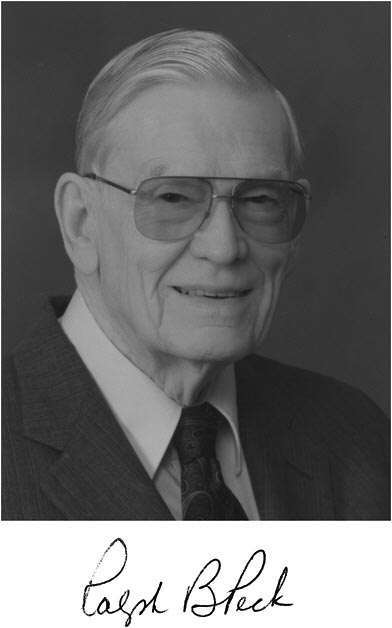 Ralph B. Peck was born in Winnipeg, Canada, in 1912. He grew up in Denver, where his father was Engineer of Structures for the Denver and Rio Grande Western Railroad. He received the degrees of Civil Engineer and Doctor of Civil Engineering at Rensselaer Polytechnic Institute in 1934 and 1937 with the intention of becoming a structural engineer. After eight months as a structural detailer with the American Bridge Company, he attended the Soils Mechanics classes of Professor Author Casagrande at Harvard until 1939. At this time Dr. Karl Terzaghi became a consultant to the City of Chicago for the design and construction of the Initial System of Chicago Subways and Peck became his representative on the job. He was in charge of soil testing and field observations until the work was closed down during World War II, when he became Chief Engineer of Testing on the construction of an ordnance plant in Marion, Ohio. In December 1942 he joined the Civil Engineering Department of the University of Illinois at Urbana, from which he retired in June, 1974, to Albuquerque, New Mexico.


Professor Peck's main interest has been observation of the behavior of earth and rock during construction and under stress. He has been equally concerned with the organization and presentation of new knowledge in this field in a form useful to the practicing engineer. He is the co-author of two books, one with Karl Terzaghi, "Soil Mechanics in Engineering Practice", now in its third edition with G. Mesri, and one with Walter E. Hanson and Thomas H. Thornburn, "Foundation Engineering". Both are directed to the needs of the designer and constructor. He is the author of over 200 technical papers, some of which have been included in the book, "Judgment in Geotechnical Engineering - The Professional Legacy of Ralph B. Peck", which appeared in 1984 and "Ralph B. Peck: Educator and Engineer - The Essence of the Man", published in 2006.


He was President of the International Society for Soil Mechanics and Foundation Engineering from 1969 to 1973; has been the recipient of the Norman Medal, the Wellington Prize, the Karl Terzaghi Award, and the President's Award of the American Society of Civil Engineers; the 1972 National Society of Professional Engineers' Award; the 1973 Moles Non-Member Award; the 1983 Golden Beaver Award; the 1976 Washington Award; the 1988 John Fritz Award; and the Outstanding Civilian Service Medal of the U.S. Army. In May, 1974, he received the honorary degree of D. Eng. from his Alma Mater, and in 1987 the honorary degree of D.Sc. from Laval University. In 1975 he received the U.S. National Medal of Science from President Ford. In 1999, he was elected to the Rensselaer Hall of Fame, and in 2000 was selected as the first hero of the Geo-Institute of ASCE. He was a member of the National Academy of Engineering.